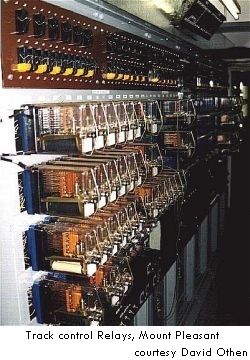 Power was originally taken at 6,600V 3 phase AC and feed to 3 substations, where rotary converters, supplied by English Electric were used to convert the power to 440V DC. The rotary converters were replaced in 1960 with more economic mercury-arc rectifiers. In 1981 the National Grid took over the power supply, this was bought in at 11,000V AC and is feed to 5 substations along the line. The Mercury-arc rectifiers were replaced with GEC air-cooled silicon diode rectifiers, this reduced power loss and did away with large cooling fans.

The driverless trains took power from the center rail, which runs at 440 volts DC in the main tunnels. This allows the trains to travel at speeds, of up to 40 mph. The sections in the station are supplied at 150 volts, which allows the trains to travel at approx. 7 mph. One of the running rails is connected to earth, thus acting as a return for the traction current and also track circuits. The other rail is divided into short sections, connected with isolators. When the wheels of a train bridge the sections an electric relay is operated which removes the power from the previous section of track. The power is not then restored to that section until the train clears the section that it has just entered. This gives a dead section of track to the rear of each train travelling along the system. The trains brakes are held off by electromagnets whilst its receiving power and on the move, but when it hits a dead section of track the train brakes are automatically applied and held on by large springs. 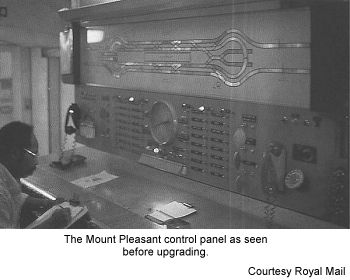 When the Railway was first opened, it was controlled from control panels located in the inter-platform tunnels at the stations. These panels allowed trains to be shunted in the station, or routed straight on to the next station. The switch panels were mechanically and electrically interlocked. Outside each station is a short dead section which brings each train to a halt. If they can be admitted, the line controller could operate a receiving lever controlling a camshaft motor which closes three relays progressively bringing into use three different voltages to control the trains rate of approach. The first relay energizes the dead section at normal line voltage, 440 volts and sets the train going, the second relay reduces the voltage to 206 volts, so slowing up the train without the use of brakes (remember the 1 in 20 gradient) and the third relay reduces the voltage to 150 volts which brings the train into the station at 8 miles an hour. On entering the station, the train rides into a dead section and the brakes are automatically applied. 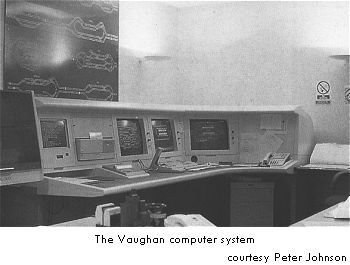 1993 saw the installation of a £750,000 computer to take over control of the system from one central point. The Vaughan computer directly interfaced with the existing control system. The computer system was bought into operation section by section, this allowed the system to carry on operating as normal during the installation. Each station had its own computer, interfaced to the existing relay system.

The computer could control the progress of each train on the system automatically, if needed the line controller could take control of any part of the system, and reroute trains as needed.

Check out the Track plans of the railway, as it was after the construction of the additional station at Rathbone Place. Many of the passing loops, and sets of points have been removed from various parts of the system.