A complete history of the transportation of mails, beneath the streets of London over the 19th & 20th centuries, Including details on the Pneumatic Dispatch Company and The Post Office Railway. 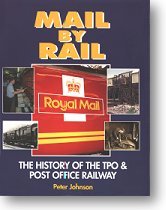 An excellent book, containing much information about the Post Office Railway and the Travelling Post Office, with many photos. A few copies of this book are still available to purchase on Amazon.

An another fascinating book, albeit some parts are a little out of date. Giving details on not only the Post Office Railway system, but also the London sewer system, disused Underground railway stations, and many other unknown tunnels.

Discover subterranean London. Covering the London Sewer  Systems, Electricity Board tunnels, Gas Board Tunnels, Railway tunnels and tunnels& that never really had any use. An interesting book, albeit a little out of date now and does contain a few errors. 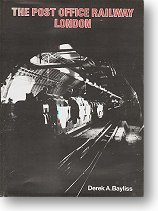 A complete history of the Post Office Railway up to 1978. Includes a chapter on  the 'The Pneumatic Dispatch Company'. A fairly old book now, probably only available from second hand sales.

OK, so I know its not a book, but this film does show a part of the MailRail system. In the film, the system is portrayed as the Vatican's Underground Postal railway. In one scene Bruce Willis is seen escaping from the Vatican's museum,  through a station, as mail trains pass  by.

Some other interesting books I've found...

A well researched book that is very up to date. A good follow on to London under London. With sections on  the Jubilee Line extension, Underground rivers and many other hidden tunnels. Found this book to be easy reading, whilst at the same time being very informative.

If your interested in finding out about the deep level tubes that were never used for trains, this is the book for you. It explains how other uses were found for the tubes, including storage for priceless works of art, use as telephone exchanges.

Recommended to anyone with an interest in the disused stations of London Transport. Many black and white photos showing how they looked in their prime.

The Story of London's Underground

Contains some excellent pictures and describes the history of the Underground. Describes how the circle was created, and goes on to explain some of the technology used on the modern lines.