After much debate in Parliament the contract to build the tunnels was won by John Mowlem and Company. February 1915 saw the commencement of the construction of the tunnels from a series of shafts dug at points along the route of the line. Most of the line was constructed in London Clay, using the Greathead shield system, hand mining was used for the connecting tunnels at stations. Due to the outbreak of World War 1, work on the railways electrical systems was suspended, but for safety reasons, work on the tunnels was allowed to continue until completed. During 1917, due to the shortage of labour and materials, Mowlem had to suspend work on the stations. During the later years of the war the tunnels were used to house some of the Capitals art collection, from the Tate Gallery, National Portrait Gallery, British Museum and the Wallace Collection. 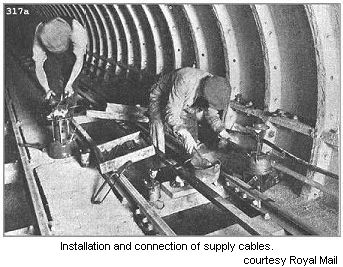 Just out of interest, the stations were used as dormitories for Post Office staff during the Second World War. It was not until June 1924 that track laying was commenced using 1000 tons of running rail and 160 tons of conductor rail. 1925 saw the commencement of the installation of the electrical equipment, lifts, conveyors and mail chutes. Again progress was slowed, this time by the General Strike and the electrical installation took a lot longer than expected. It was not until February 1927 that the first section, between Paddington and West Central District Office, was available for training. October 1927 saw the finishing touches put to the railway, and the line was available for use for the Christmas parcel post. February 1928 saw the first letter post on the system.

It was decided in 1954, that because of the problems of access at the Western District Office, Wimpole Street and the Western Central District Office, New Oxford Street that a new Western District Office would be built at Rathbone Place. This entailed building a diversion to the line that would run through the basement of the new office. The trains were diverted onto the new line in 1958. It was not until 3 August 1965 that the new station and office was opened by the then, Postmaster General, Anthony Wedgwood-Ben. The disused section was used as a store tunnel, some parts of it still have the track in place. 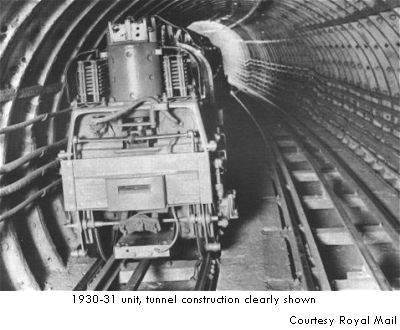 The main line consisted of a single tube, 9 foot in diameter. The base of the tube was filled with loose ballast, on which a concrete raft, 12 inchs thick was laid. Onto this was laid the track. The tunnels diverge using a step-plate junction just before the stations, into 2 single line tunnels at 7 foot in diameter. These then connect to 2 parallel station tunnels, which are around 25 foot in diameter. The platforms are built on a 'First floor level' within the tunnels, the area beneath, used to house the electrical control equipment.

Although the main tube is at a depth of around 70 foot, the stations are constructed at a much shallower depth, giving a 1 in 20 rise and fall, into and out of the station. This served two purposes, the first is that the mail had less distance to travel from the platforms to the surface. Secondly the gradient on the line, to and from the station, served to help slow the trains on their approach to the stations, and assists with the acceleration away from the stations.