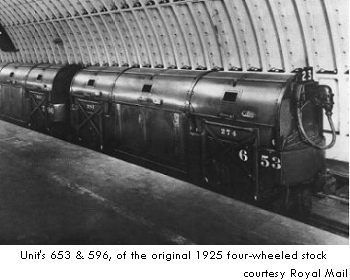 In 1925, Kilmarnock Engineering built, 90 '4wRE' Four-wheeled units with English Electric traction equipment for the opening of the railway. These units were designed to run in a 3 unit formation. Despite being tested on a test line, built on land owned by Woolwich arsenal, these units immediately proved to be difficult and expensive to run. The 7 ft 3in wheelbase was unsuitable for the very tight curves on the railway and caused frequent derailments and very heavy wheel and rail wear. English Electric also supplied three 4 wheeled Battery Locos, (702-704). These were used for for maintenance and also to recover broken down mail trains. They were designed to haul 18 tons, for 6 miles on one charge. Power was taken from two banks of 76 cells giving a total voltage of 350v. Braking is by screw hand brake on all four wheels, there is also a rheostatic braking system fitted. 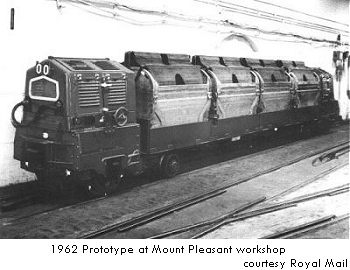 In 1929, after trials with an articulated car and a bogie car, an order was placed with English Electric for 50 Bogie '2w-2-2-2wRE' type units (752-763 and 793-830). These used the traction equipment removed from the 1928 stock. When the first of the bogie units were delivered, between 1930 and 1931, derailments were as still as bad, but after experiments with the kingpin positions, track realignments and the installation of rail lubricators on the sharpest curves, the problems were eventually solved. In 1936, because of the increase of mail traffic, 10 more 'Bogie' type units (923-932), were ordered from English Electric.

No more orders were placed for new stock until 1962, when two new prototype units were ordered from English Electric (3334-5). These two units featured improvements such as disk brakes, redesigned loading ramps and a new design of traction motor, to give better acceleration. One of these was withdrawn after only 5 years in 1967, the other surviving until 1980. This was later repaired using parts from the previously scrapped car and renumbered 66. 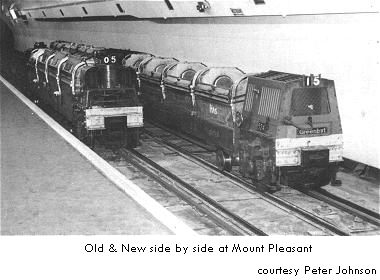 To replace the bulk of the 1930/36 stock, an order was placed with Greenbat of Leeds. 34 new units (501-534) were delivered between 1980 and 1982. Unfortunately Greenbat went into receivership after delivering only 3 units, but production was taken over by Hunslet Holdings Ltd. The new units had to be compatable with the existing mail containers, so the units were of similar dimensions to the older ones. Some ideas from the 1962 units were incorporated into the design. The order included two extra power units, as any repair work was likely to take longer on the power unit, than on the trailers. The remaining 1930/32 units were rebuilt for further use on the line, and the ownership of four was passed on to various museums.

1967 saw the construction of a VIP carrier. Based on the 1929 bogie unit, this unit had 18 tip-up seats, perspex roof and had the monograms of the four British monarchs from King George V to Queen Elizabeth II, painted on the side doors. This Unit had to rely on a battery loco as it had no traction equipment. A second passenger carrier was build in 1976, from a 1930 unit. As this was only used for permanent-way crews it was fairly crude with only bench seats and a wire mesh roof. 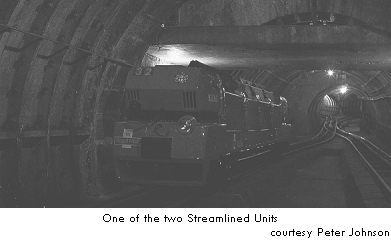 To celebrate the railways Golden anniversary in 1977 two of the 1930/32 units (801 and 806), were repainted into gold livery. In 1987 three of the Greenbat units (502, 514, 532) were given new fiberglass cowlings, to help slow the entry of dust into the traction equipment. Two of these units were given the names 'Capital Express' and 'London Flyer', which a year later were changed to 'Great East Express' and 'Great West Express'. At some point, two of the 1925 '4wRE' units were converted to breakdown loco, No 1 and No 2, and later these were again converted, this time to wagons. Another 1925 unit, 652, was converted to a battery carrier. The railway also had various other wagons for conveying rail and other parts.